Well, the recital was a complete success! After Friday's rehearsal, we weren't too optomistic, but they pulled it off and did a beautiful job! No one fell out of her flower pot this time, no one stood staring off into space while the other girls tried to dance around her, and no one landed at the wrong pot at the end of their butterfly run around the stage...all of which happened at the rehearsal!

Here is a picture of M with her VERY, VERY proud daddy...who also had a part in the show! 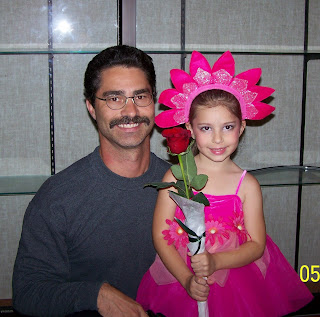 The dad's had to carry the girls, hidden inside their flower pots, out onto the stage in almost total darkness. Some of the girls had to have two dads/uncles/friends carry them, but my girl is small and my man is quite manly, so he carried her all by himself. He even got his name in the program as a stage hand, LOL. Now that you see my man, can you see how they ALL look just like him...except for little D? The man calls him "the mailman's kid", but I just call him MINE, 'cause he is the first to look like me! Although that blonde hair is still a mystery...

After the recital, we took the girl out to Applebee's for dinner. When asked what she wanted to drink, she declared "Give me a BEER..........ROOT!" Followed by fits of giggles. I think she was a little giddy from the whole show-biz thing. About that time, little D. starts yelling across the table, "Don!....Don!!.....Don!!!" (Which is what he calls Jon.) To which we all said, "Jon, ANSWER him!" Jon says, "What?" And Dave says, with his head cocked to the side, "mnkdoemrlfinslguine,f.ao mdksn,dlsfiaekem,d mdksojekl?" To which the entire restaurant (well, those within earshot) burst out laughing. Then Dave yells again, "DON!!" Jon says, "WHAT?!?" Dave sits perfectly silent but moves his eyes side to side to see if the crowd will laugh again...they did. And so it continued until most of his audience had left to get back to their own sad little lives that unfortunately did not include the round-the-clock entertainment of David!

I'll have to come back and post on Mother's Day later. It is time for our final ballet class before summer break. (Yippee! Two hours added to my Mondays for the next 3 months!) They will be doing their "fun" dances: The Teddy Bear Picnic, Late Last Night with Joe Scruggs, 5 Little Monkeys, etc. one last time and then eating cookies and drinking lemonade. And because I know you are curious, these are the cookies we made. 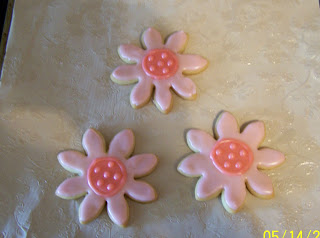 I figured since they were "Summer Daisies" in their recital, it was only fitting to make daisy cookies for the occasion! We are each supposed to only bring 3 cookies because there are 5 girls and 3 cookies each makes 15 which is plenty for parents, siblings, etc....however, nobody listens. Most of the mom's pick up cookies at the grocery store on the way, or have their daughters bake cookies with them to bring, and of course they want to make one for every single one of their friends! We bring lots because they fight over them. We have to have enough for each girl AND her mom...siblings are on their own to scrounge for what they can find. I made 15 of these this morning, but broke two of them while transfering them (those petals are delicate little suckers!), so we will go with 13. Oh wait, 13 isn't a lucky number...I guess I'd better eat one! Not that I believe in luck or anything, I'm just looking for an excuse to eat a cookie! Have I told you how tasty they are? They REALLY are!
at 9:40 AM

It seems to be Recital Central. I can't believe how many blogs have been talking about their girls in recitals. Ours was Mothers Day which seems crazy to me since it is mostly the moms that run ours.

Your cookies are adorable. You've inspired me to find an excuse to make some!

have a blessed day!