Well, it's time for the Weekend Wind-Up even though since it's a holiday, the weekend is not technically over...

The graduation party went well for the boys. My sister-in-law gathered a bunch of pictures of them growing up, and I made a photo slide show of them with Wayne Watson's "Watercolour Ponies" playing in the background. It made me cry and they aren't even MY kids! I'd upload it for you, but I don't think my sister-in-law is too keen on the idea of putting her babies out there for strangers to look at! LOL!

And then there was, of course, CAKE! 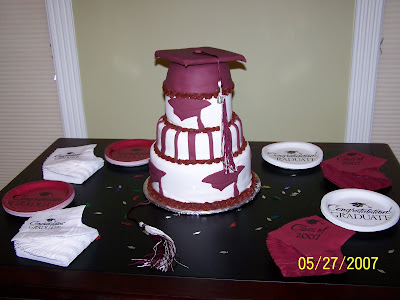 It was a combination of chocolate layers and white/vanilla layers. YUM! And, yes, the cap on the top is made of cake, (the mortar board is cardboard covered in fondant) but that is a real tassel off of one of the boys' graduation caps. It was sooo hard for me to decorate a cake in Aggie colors, being the devout Longhorn fan that I am, but alas, those were their high school colors, so I bit the bullet and did it...sigh.

That was about it for the weekend...graduation and cake!

Although, my boy, Dario Franchitti did WIN THE INDIANAPOLIS 500!!! I was soooo excited about that! And sad that my other boy, Jeff Gordon, got wrecked in the Coca-Cola 600 later that evening...although Kyle Petty finished 3rd and if any of you follow NASCAR, you know how funny that truly is...and it made me VERY happy! I like Kyle. I can't remember the last time he finished in the top twenty, so every week, while I'm hoping Jeff wins the race, I'm quietly cheering on Kyle, hoping he breaks out of the 30's...I was tickled pink to see him finish THIRD last night!!!

And we aren't even going to discuss my Spurs...they let me down, and little Dave was even wearing his Spurs suit...they've never lost before when he wore his Spurs suit...I'm so very disappointed. (Even though he just got it, and had only worn it once before....still, we were on a roll. LOL!) I haven't even heard how my Astros did over the weekend...I know they lost at least once...sigh. So, if it weren't for Dario, it would be a sad weekend for me, sports-wise. Oh well, hopefully this week will be MUCH better all around!

So, today we head back home. I'll start tackling the house and trying to get things washed, and packed for our trip next weekend, as well as cleaning and scrubbing as much of the house as I can before my surgery...which I am assuming is "a go" since I've had multiple phone calls from the various doctors, surgical centers, etc. calling to get me to pay for it all ahead of time....you know, just in case I don't make it through the surgery...at least they'll have their money!!! As you may recall, we were supposed to be waiting on the final report from the radiologist as to whether or not the surgery was going to do me any good...and of course, that is the one person I haven't heard from yet! Sigh...

Everyone have a GREAT Memorial Day, and remember to pray for all the families who are mourning the loss of their soldiers today. Freedom, isn't free, is it?
at 10:02 AM

Praying for your surgery.

I love seeing your cakes. My Mom use to sell cakes that she made, so it's fun to see what you make now. They look very different then hers:)

I love that cake! You did a GREAT job - I'm enjoying your site.