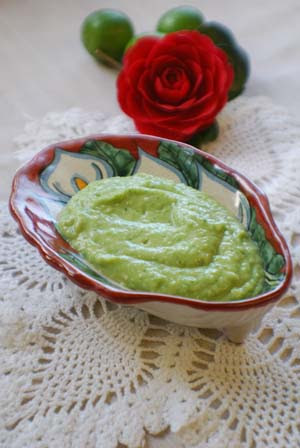 I was surfing the Internet recently, looking for a good recipe for sweet potato fries, when I accidentally came across this avocado dip recipe from Ingrid Hoffman on the Food Network Website. It is the recipe for a dip that she eats with her sweet potato fries. I didn't have all the necessary spices for her version of the fries, but the dip recipe looked really, really good, so I decided to make it anyway and now the girl and I are totally addicted!

We eat it on carrot sticks mainly, but also on "Hint of Salt Saltine Crackers"...because I'm allowed to eat those. I have also put it on my breakfast tacos, and it was amazing there too. I suspect it's pretty good on chips, although I'm not allowed to eat those, so you'll have to try that one out for yourself. I still haven't tried the version of sweet potato fries that are supposed to accompany the dip, but I have several sweet potatoes just waiting to be made into fries, so I'll be checking that out soon too!

As with most recipes, I did change things up just a bit to fit in with my diet needs as well as palate choices. So you can click the link above to get the original recipe, or if you like a bit more avocado and a lot more kick, you can try my version below. One tip I will point out is to use Haas Avocados in this dip. In Ingrid's recipe she mentions that Haas Avocados will produce a smoother dip...she is correct! I used a different kind on my latest batch because they were on sale, and the dip came out with small chunks that I could not process out. It still tastes good, but smoother is just nicer with a veggie dip. Also, the original recipe calls for you to remove the seeds from your jalapeno before adding it to the dip. Ahem. We are Texas women over here, and that would have just been sacrilegious...plus, the girl likes her heat!

Putting it all Together:
Slice the avocado in half and remove the pit. Scoop the meat of the avocado out of the skin with a spoon, cut into chunks and toss in the food processor.
Slice the jalapeno in half-lengthwise, then in half-lengthwise again, then dice into smaller bits and throw it all into the food processor with the avocado...seeds and all!
Mince the clove of garlic and add it and the onion to the food processor as well.
Cut the cream cheese into small chunks and throw it in with everything else.
Add the mayo and the lime juice and get ready to blend!
Process at high speed until all ingredients are well blended and smooth.
Add pepper to taste.

*Note: the above picture is random, not an actual picture of this dip. This dip will be a lovely pale, pale green and very smooth. Also, I have tried this with low-fat cream cheese, and light mayo. I kept the light mayo, but went back to regular cream cheese because it made the dip too runny to use the low fat version...AND the low fat/fat free cream cheese has more salt in it than the regular version. While I'm allowed a very small amount of dairy each day, salt is a big no-no, so that influenced my choice as well. But feel free to experiment with what you like and make it any way you want!

Email ThisBlogThis!Share to TwitterShare to FacebookShare to Pinterest
Labels: Recipes

My dear friend,Kelli got some more bad news last week regarding her quest for a new kidney. The living donor that was looking so promising has been ruled out, and they are running out of people to be tested. This is just one in a several setbacks Kelli has faced on this journey, and she reveals many of them, including how YOU might possibly help in this post. If you can't do anything else, could you please help by spreading the word through your Twitter, Facebook, and blogs? You never know who is out there reading who may be able to save the life of one of my best- friends-that-I've-never-met. :)

There's Something in the Air

As I've been lying around doing a whole lot of nothing other than coughing and moaning pitifully, I managed to catch up on my blog reading. I have missed visiting everyone and it was fun to get back in touch. But this post by Bev had me in stitches! Just trying to picture Bev shooting snakes and scorpions from the safety of her front porch was a mental video worth watching, but this little paragraph hit home the hardest.

"My Dad tells me you need to stand at least 12 feet away from a skunk before you shoot it. He learned this after pelting one with a big rock, and coming home to have his mother strip him bare naked in the front yard and put him in the horse trough before she'd let him back in the house. I'm taking his word for it when I deal with the skunk we've seen on our carport twice already."

You see, last week, my next-door neighbor told us that a skunk had gotten into her garage and sprayed the place (perhaps one of her bajillion cats gave it a scare, who knows), but the spraying was strategic. It was almost like an episode of "24" if, you know, terrorists were, in fact, really skunks.

Said skunk, not only stunk up her garage, but managed to get the spray into the heating system of her house!

We had a little cold snap here recently.

She said she couldn't even sleep there. I'm thinking that would be the least of my concerns. I mean seriously, I bet that smell is in everything: the furniture, the walls, ALL OF HER CLOTHES!!!

I'm also thinking she's probably really glad she's got that camper parked in her driveway so that she at least has a place to breathe. But I bet she's wishing she had put a few extra sets of clothes in that camper right about now....and maybe that Jack Bauer had been on the case...those terrorist-skunks wouldn't have had a chance!
at 5:04 AM No comments:

Email ThisBlogThis!Share to TwitterShare to FacebookShare to Pinterest
Labels: ramblings

Hey There, Remember Me?

Well hello there strangers! I know, I know, I've been MIA for a month! When I last posted, I told you we were all sick over here. We were sick for 2 weeks! BLAH! Then, once we started to feel better, I was spending all my time trying to catch up on schoolwork and housework around here. Then just as I began to see a light at the end of the tunnel, we got hit with another virus...UGH!I'm telling you, my kids are rarely sick, and never for more than a day or two, but this winter has been awful! I know there's a lot going around, but good grief!
Anyway, I decided it was time to at least poke my head in over here and check in with everyone.
Besides being sick, we have been extremely busy around here since Christmas. I've drastically cut back on the number of cakes I'm doing because life was getting out of control, but I did do this one for my church friend's 40th birthday surprise party. She loves flowers, so I was able to put to use that gumpaste flower class I took 2 years ago. :) Unfortunately, this was right after I had burned my thumb and I found it really difficult to form the roses, so there aren't nearly as many on here as I would have liked. 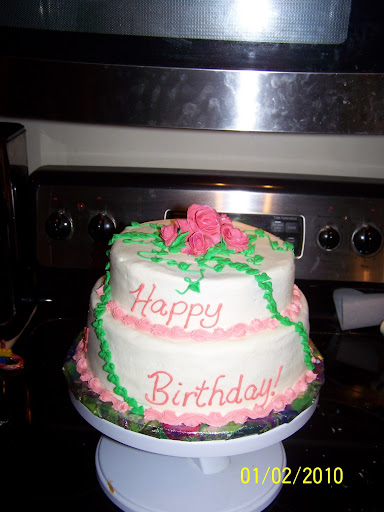 I made another cake for a wedding shower during this time, but I don't have that picture on this computer, so I'll have to post that another time.
Both the girl and the #2 boy had birthdays at the end of January, and while the boy wanted nothing special, and no fancy cake, the girl had other ideas! She had her first-ever sleepover party with two of her friends. 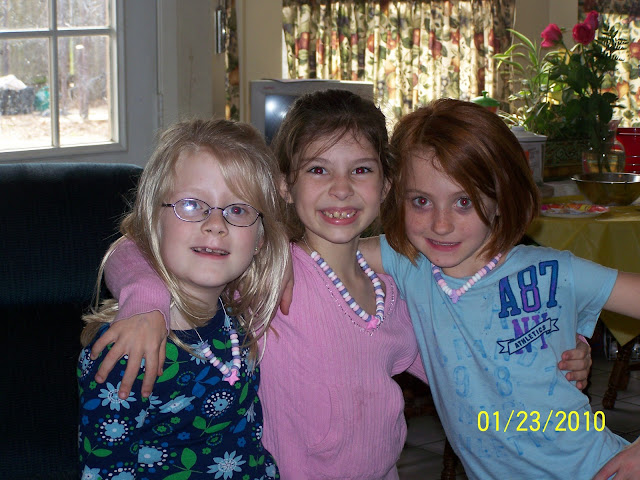 There was lots and LOTS of Disney's Sing It on the Wii. 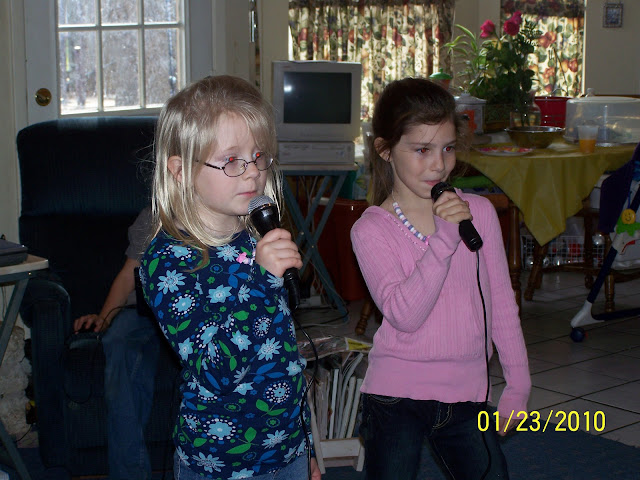 After they were all sung-out, they all got in their jammies with popcorn and their new Knifty Knitters (party gifts) and watched The Game Plan. 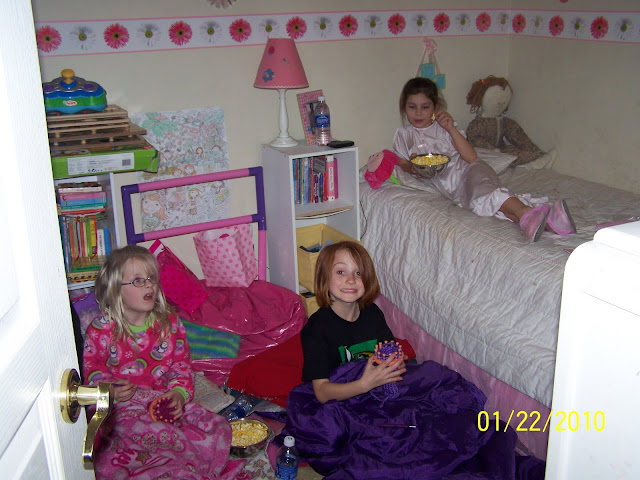 And of course, there was cake. Mmmm, chocolate microphone! 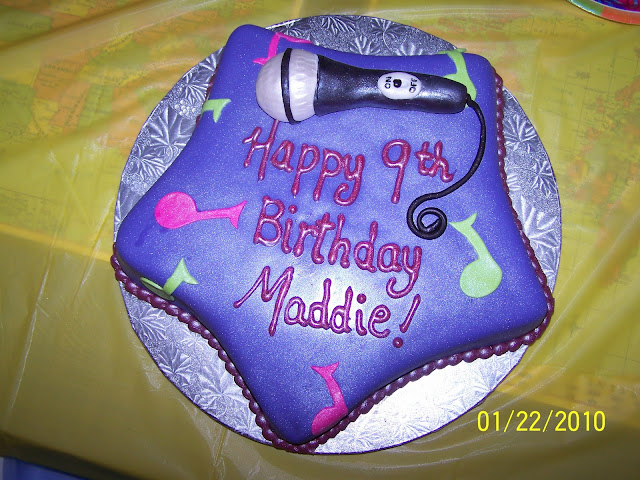 And then, in my spare time...lol...I've taken up knitting! It started as a way to avoid snacking while I watched tv with the family, and has ended up a passion. I started with hats due to the fact that the girl and I needed stocking hats with ponytail holes in them. I mean really, have you ever tried to wear a stocking hat with a ponytail...it looks like a tumor growing out of the back of your head! So I made a few hats and scarves, and then I made a couple of shoulder shrugs for the girl. Then, I got an invitation to a baby shower and decided to try and make my first baby blanket. I've got to find out how to take those really good pictures that show the detail of the stitches, but for now...here you go. 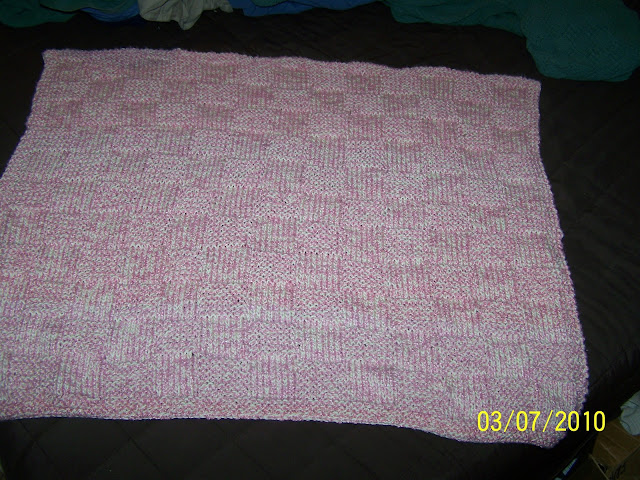 And that should pretty much catch you all up on life around here lately. We are heading toward the Spring Dance Recital for the girl, and she will dance 10 times in this year's recital! So that's going to be a blast, and the boys are off this weekend for another motorcycle event. They all got trophies at the last one, so the year has started off well for all of our extra-curriculars...now if we could just quit getting sick...2010 will be a MUCH better year!
at 5:17 PM 1 comment: