Ups and Downs and All Arounds...

I've been having kidney troubles again. And while I've managed to fulfill my responsibilities thus far, in between each of those events, I've been crashed on the couch...recovering. Last weekend, while I was in San Antonio for the ShowStoppers Dance Competition with the girl, it became unbearable and I knew that something would have to be done--soon. So, I am here to announce that I am having surgery to remove blockages in my kidneys tomorrow, March 1st at 3:00pm CST. If ya'll want to say a prayer, that would be awesome.

However, my problems are NOTHING compared to my friend, Kelli. In my last post, I wrote that after 5 agonizing years, a possible donor was found to give Kelli a new kidney. Yesterday, that donor was rejected. She was the last one on a list that began with 50 or so candidates, and they turned her away. The search begins again. My heart is broken for my friend and her family. So while you're saying those prayers, please send one up for her as well, and if you've ever considered being a living kidney donor, please, please, please head on over to No comments:

The Best News EVER!!!

Last night, I was in my car listening to an audio book, when it paused and chimed indicating that I had a new email. I paused the book to check the email,(Calm down, I was just sitting in the driveway listening to the end of the chapter--not driving!) and it was from Kelli! And it contained the best news EVER!!!

WE HAVE AN APPROVED KIDNEY DONOR!!!

WE HAVE AN APPROVED KIDNEY DONOR!!!

SURGERY IS TENTATIVELY THE END OF MARCH!!!!

5 YEARS FROM THE DAY I WAS FIRST LISTED!

We just got word that Sarah has been approved, and should be flown into Cedars in the next 2 weeks or so.

Surgery is tentatively the end of March, but we will know more as we go.

Are we excited? Yes/No. I think with all we have been through it will be a "once I am on the table" thing.

I will need to be going to LA for treatment starting the first of March for 3 treatments, one week apart.

So, now, we just have to kick fund raising up to the moon to get all this paid for.

Ok God, sell a few of those cows on the hill please :)


YOUR PRAYERS ARE SO APPRECIATED OVER THESE LAST 5 YEARS EVERYONE. You have sustained us through so much fear and doubt and and and and and ....

I am sooooooooo happy for my friend who will hopefully have kidney function within the next two months and then perhaps she can get those legs to start working again! The road is far from over, but the light is bright and shining at the end of a very, very long tunnel.

You can pop on over to Kelli's Blog to get more details, or to get to know this amazing friend of mine a little better, or to make a donation to help her pay for all of the travel and surgery and whatnot.

Email ThisBlogThis!Share to TwitterShare to FacebookShare to Pinterest
Labels: praise

An Update on Baby Lily... 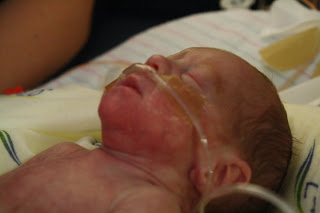 As you can see, she is a peaceful little thing.

Since I last posted on her, she has been taken off the ventilator, but apparently still "forgets" to breathe sometimes and will go quite pale--which scares her mama quite a bit. But, she was up to 2 lbs. 4 oz. at her last weigh in and is eating quite well.

She has brain scans regularly to look for infections and other problems common to preemies. So far, they have all come back clean. However, her last test showed a potential problem. Here is the post from her mama.

Please pray especially for healing for Lily. Her brain ultrasound came back with evidence of small cysts in her frontal white matter which is known to cause cerebral palsy. The doctors said we have to wait to have an MRI done for a more conclusive diagnosis, but it will not be done until she is closer to going home. These cysts can go away which is what we are praying for.

Please join us in praying that these cysts disappear on her own and that Lily continues to grow and develop normally as she would have in the womb.

She is getting so big, I think you'll be seeing some pictures of "big girl" knitting projects popping up here soon! :) 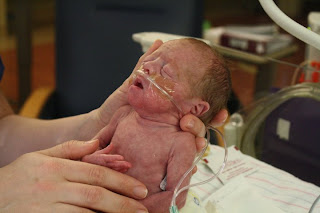 Recently, a conversation was had at my parents' house. It began with a discussion of the newly released movie, The King's Speech. I had heard there was a lot of profanity in the movie, and my father was explaining that it was a necessary part of the story as apparently, just as stutterers can sing without stuttering, they can also curse without stuttering. So in this particular case, the cursing was...therapy. (Upon hearing this, my husband cheered.)

The conversation then took a turn and we began discussing the socks I was knitting, and the fact that I had recently walked into a yarn store to find no fewer than 5 men knitting along with the ladies in a knitting group. Now I had heard that there are men out there who knit, but I'd never actually seen them in real life. It was fabulous!

Anyway, this led the conversation around to the rumor that Russell Crowe is a knitter. And it was suggested that perhaps he used the knitting to control his temper--as opposed to the therapy described above. :)

At any rate, I did manage to finish my January socks with one day to spare, and just in time it seems. Yesterday we had a high of 81 degrees--today the expected low is 18!!! There are two things that make this forecast bearable: 1) This is Texas, and it can be 18 degrees today, but chances are that before the week is out, it will be closer to 80 again, and 2) I have a lovely pair of Merino Wool socks to wear with my boots to keep my tootsies toasty! 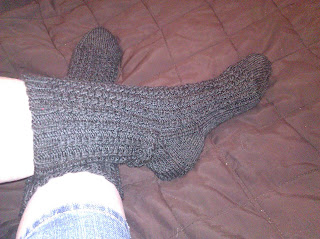 I also finished the stocking cap for the neighbor boy and yesterday I found the yarn to finish his matching scarf. I'm betting he's wishing I had found that yarn a bit sooner right about now...brr! (I'll get a picture once both are finished.)

I also finished the beret for the birthday party TWO DAYS EARLY! It is modeled here by my lovely daughter--I've not yet seen the birthday girl with it on...but perhaps now that it's frigid outside, I will! 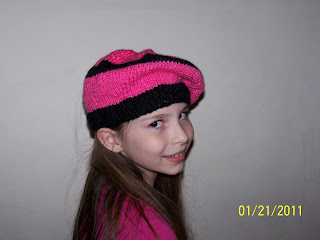 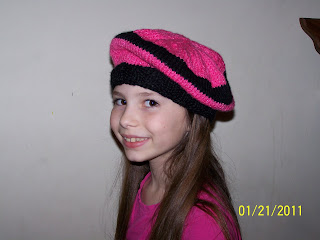 And I was able to finally get a picture of my mother-in-law in the sweater that I knit for her this Christmas. 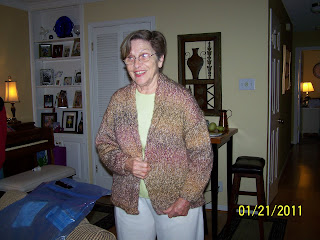 This pattern is apparently not for the beginning knitter, or even the somewhat-experienced knitter, this pattern is definitely for the advanced knitter--which I am not. I managed to work 13 rows of a 16 row pattern before I dropped 3 unrecoverable stitches and had to frog the entire thing...sigh.

I cast on again and managed 3 rows of ribbing before I noticed that I had cast on too few stitches and had to start over....again.

At this point, I am seriously considering switching to that other form of therapy....
at 1:27 PM 1 comment: