Wow, what a busy week we've had around here. On the bright side, I've been feeling MUCH better the past week or so. But, because of that, I've been busy here around the house, and haven't stopped to write a real post in forever! I've been reading a couple of blogs each day, but that's about it. So, if you've missed me over at your place, I'm sorry, and I'll be back soon.

I was inspired by Bev over at "Scratching the Surface" (formerly "Blessed Beyond Measure") to start cleaning out all the junk around here and try to fix the place up a little. More news on that front will be coming in future posts...

And then I was inspired by Sarah at "In the Midst of It" to cook at least two meals each day for my family. So, I've been cooking breakfast rather than doling out cereal and frozen waffles in the mornings, and I've been cooking dinners with all four food groups! It's really nice to be feeling well enough to do all this, but man it's a lot of work! It hasn't left much time for blogging and tv watching! But since all of the shows I regularly watch are off now for the summer, there isn't much to watch anyway. I did succomb to my curiosity and I rented the first DVD from the first season of LOST. The video store has all seven of them, except for the 2nd one, so I'm waiting on that before I can continue to catch up with the rest of the known world on this one. I must say, it has me intrigued and curious to find out the answers to about a million questions....but I've read enough other blogs to know that I'll probably be getting no answers and a ton more questions in the weeks to come!

I have also discovered reruns of "The Biggest Loser" and now I am just so concerned for these people and their weight loss goals that I cry with them when they lose another 6 pounds in a week. They have also inspired me to get up and get back on the exercise train myself. I stopped my daily exercise when the kidney pain and swelling started. Now that I'm better, I need to get back to it. I've put on another 4 pounds through this mess....sigh.

My new habit of cooking more hasn't helped the whole weight thing either. I was browsing around the "Food Network" website looking for recipes that the kids would like and I could eat, because I get really tired of cooking two different things for dinner every night. Anyway, I found this recipe for Island Bread Pudding and oh. my. word. it was good!! And since we had just watched an episode of "Home Cooking" in which Paula Deen had both of her boys cooking in the kitchen with her, I was in the mood to cook with my boy, and he was in the mood to cook with me, so we made it together. It is made in the crockpot, and there really wasn't anything that an 11 year old boy couldn't do. I helped with cutting up the bread, and mixing everything up really good, but he did most of it himself. Anyway, I highly recommend it for any of you who are not participating in the "Tales of the Scales". If you are on the losing weight voyage...check it out when you are all done and are allowed to splurge a little. It is to die for!

And, since I've been gone from bloggy land, I've had to purchase a new purse.... I know, it was a sad day, but my beloved baseball purse finally bit the dust. It got to the point where the strap would come off while I was wearing it on my shoulder, and that tear in the lining kept swallowing important stuff. So the next time I was near the store that carries all those really cute "Texas Longhorn" purses that I've been eyeing, I stopped to take a look. Would you believe they were having a 40% off sale on all purses and wallets??? I walked out of there with this... 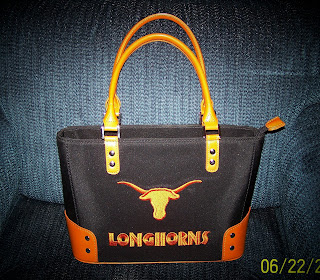 I didn't get a matching wallet, because my baseball wallet that matched my baseball purse is still in great shape, and being black and all, it matches the new purse just fine.

And on a final, "catching up" note...I did bake a cake while I was gone! If you've been reading here long, you will remember The Great Cake Catastrophe of 2007. Well, if you recall, when I heard from them again...they weren't angry with me at all, and asked me to make the cake for another shower in June. Let me tell you, I was so nervous about making this cake! But, I think it came out well. 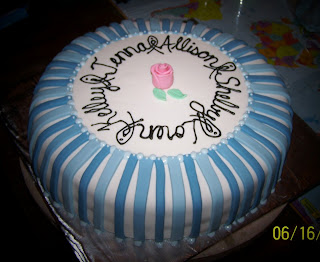 Next up is the wedding cake and groom's cake for this same couple. I am still nervous, and will be so relieved to get this one out of the way and in the books! And that is where I will be this coming week. I'll try to get in here and post throughout the process. I think Barb has the right idea. She has been posting every day during all the preparations for her daughter's wedding. She says it doesn't take her long to write a post. I am the opposite. It takes me forever to write a post! But I think it's because I wait until I have a block of time to sit down and do it. By that time, I have a million things to "catch up" on. If I just wrote a few minutes each day, it probably wouldn't take me so long. So, I'm going to try it this week and see how it goes.

Mel...I just got caught up on Ethan after our 8 day trip to ND. Wow! He's quite a little fighter! We must continue to pray for that family, that's for sure!

Awesome purse! :) And....LOVE THE HAIR! You look SO much like your Mom! Beautiful, beautiful!

that cake is georgous.. i love it.. i would love to start dabbling in cake decorating.. actually i am going to my son's 1st birthday

that cake is divine...

and sooo glad you are feeling better...can you email me some of that energy to get my piles of clutter cleaned up?? :)