Hello again. I promise, I will get back to regular posts in addition to the Jesse Tree posts, but this week is my craziest week all month (at least for now) and today is the craziest day of this week! So, I'm going to post the next two lessons in our Jesse Tree devotions today, and hopefully post some pics and video of the girl doing the Dance of the Snowflakes in The Nutcracker later in the week!

If you are also doing a Jesse Tree, let me know in the comments! I'm interested to see who all is participating this year. :)

(The scripture readings for both lessons we did today were very, very long, so I'll just post the references here rather than the entire scripture passages...'kay?)

(Read by the 7 year old) Yesterday, we read that when God created the world, it was all perfect. Even the people were perfect. Today we read about Adam and Eve and how they disobeyed God even after He had given them everything in the whole world. He only asked that they not eat from one special tree. But they didn’t obey God. Once they ate the fruit from that tree they understood that there is right and there is wrong, and this brought sin into the world.

(Read by the 10 year old) God still loved Adam and Eve, but He had to punish them for disobeying Him. He had to send them out of the beautiful, perfect garden He had made for them, and they had to start working for their food. But God also promised them that He would always love them, and He even hinted at the coming of the savior to save them from their sin.

(Read by mom) Even though Adam and Eve disobeyed God, He still loved them very much. Do you remember yesterday when we said that God is not surprised by anything? God always knew that even though He created people perfect, that they would eventually disobey Him, and need to be punished. So, before Adam and Eve were even created, He had already decided to send His Son, Jesus into the world. When He told the serpent that the woman’s seed would “bruise His head”, He was talking about Jesus destroying Satan’s power forever. When He said that the serpent would “bruise his heal”, He was talking about the fact that Jesus would have to sacrifice His body, to save us. Even way back in the garden with Adam and Eve, God had already planned to send His son to die for us. 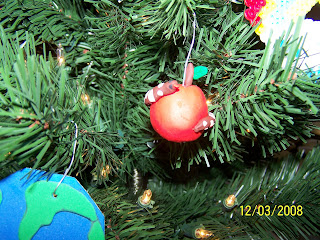 *Hang the apple ornament on the tree (This one Benji made out of "Sculpey Clay" and we baked it in the oven. I think if you click on the picture you can see it close-up. We didn't want to make it too big because we didn't want it to be too heavy.) :)


(Read by the 7 year old) Once Adam and Eve had sinned, and learned that there was right and wrong, all other people born would have to decide whether to do right or wrong themselves. There came a time when almost all of the people had decided to do wrong and God was very sad. There was a man named Noah whose family had not forgotten God and still chose to do what was right because they loved God. So God decided to destroy all the people who were making wrong choices, and to save Noah and his family because they were making good choices.

(Read by the 10 year old) God told Noah how to build an ark and God filled the ark with all the different kinds of animals and then He made it rain until the whole world flooded. All the people and animals who were not on the ark were destroyed.
When the flood was over, and the water dried up, God made a promise to Noah that he would never send another flood to destroy the whole world again. When He made His promise to Noah, He put a rainbow in the sky as a reminder of His promise. Every time we see that rainbow, we can remember God’s promise to Noah. 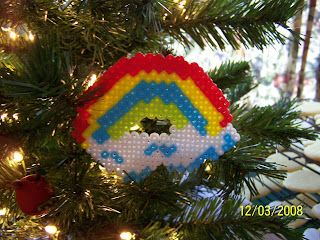 (Read by mom) When God sent the flood, it destroyed all that sin, but it also destroyed all those people. This is not what God wants. He loves us too much. When we see a rainbow in the sky it reminds us that God has another plan to destroy the sin in the world without destroying all the people. That plan is Jesus. Jesus came to destroy sin, and save the people.

[discuss promises that God has made and kept]

(pray together thanking God for keeping His promises)

*Hang the rainbow ornament on the tree (This ornament was Maddie's one to make. She used those little plastic rings that you place in a pattern and melt together with an iron. She was so glad to finally have a turn at making one of the ornaments!)
at 2:44 PM

I had not heard of a Jesse Tree before.

I am definitely going to read more about this - that is a really neat idea.

Congrats on winning the book!
:)