Just One More Reason Why I'm Glad I Started a Blog!

Two days ago while out for my morning run, I noticed that in the front yard of one of the houses was a brown recliner. Now, said recliner was turned over on it's side, but it looked like it was in pretty good shape. It is not unusual to find large pieces of furniture out near the curb in our neighborhood especially on trash day. You see there are people who drive around on trash day and look for such things to pick up either for their own use, or to fix up and sell to someone else.

That said, this was not trash day, and this recliner was not at the curb...it was just in the yard, close to the fence, next to the house. Then this morning on my run, I was ruing the day that I decided I didn't need to get a camera phone the last time I got a new one. In fact, there was a man walking down the hill that I was running up, and I told him, "You are gonna wish you had a camera phone when you turn that corner!" So, I finished my run....I stepped up my pace just a bit...and picked up my camera and drove myself back (I'm not crazy ya'll) to get this picture to share with all my bloggy friends! 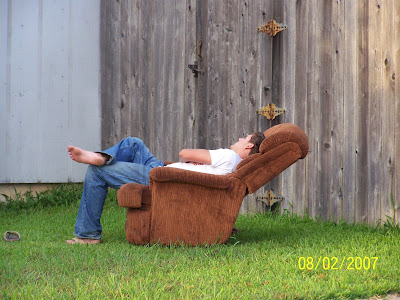 And yes, he is asleep. I couldn't believe he was still there when I got back! Now, I have no idea how or why he ended up sleeping outside in a recliner, but I've come up with a few possibilities:

1) He partied a little too much last night, and actually passed out in the chair.

2) His wife is the one who dragged his favorite chair outside, and he decided to go out with it.

3) He was actually up early this morning having his quiet time with the Lord and was not actually sleeping, but just very deep in prayer!

So come on ya'll, think up your own reasons or even just a caption for this photo and share it with me in the comments. This could just make my whole day!!!
at 8:44 AM

Email ThisBlogThis!Share to TwitterShare to FacebookShare to Pinterest
Labels: Stuff I wouldn't believe if I hadn't seen it with my own eyes

'hey dude, try going in long enough to take a bath for those dirty feet'..

this is just a hoot!

Man says: "I've always wanted a hammock, but this'll do."

Interesting to note the front part doesn't recline, only the top half. things that make you go hmmmmmmm. LOL

First, I have to just say this. I cannot believe you made a uterus cake. LOL, I almost fell out of my chair. You are too clever. The computer cake before it is awesome, but I cannot begin to imagine how you came up with this one. Or for that matter, why? Did I miss that part? Tell me this was for a OBGYN luncheon or something. Surely this wasn't a shower cake?

I'm going to look at that post again. I can't stand not knowing what this cake was for. :-)

I noticed that the footrest on his chair isn't up, too. My caption would be, "Summertime....and sleeping is easy." Honestly, I might have gone over to wake him up and ask him what on earth? Too funny.

OK, I had to get into your May archives but I got my question answered. I'm betting that cake DID lighten out that lady's coming out party. LOL

OMG Mel...that's HILARIOUS! You continue to have the BEST posts, I tell ya! :) Thanks for making me laugh! It's too late for me to come up with any caption for this guy...but if I think of one...I'll let you know! When I was reading your post and your ideas...they were identical to what I was thinking...well...the wife kicking him out one! :) Too funny! Thanks for sharing!

This is HILARIOUS!!! I love your captions! Who can top that?!

that was too funny!

Too hilarious. I imagine a fight with his wife over watching TV and sitting in the recliner so he upped and picked it up and went outside, like the proverb of the man on the roof becuase his wife is a dripping faucet! Is that too negative? What a hoot!