Things have been entirely too serious around here....

so...I thought I'd just jump in here for a minute and fill you in on the latest episode of "The Young and the Restless" aka "The Adventures of David".

I believe that I have mentioned once or seventy times that little Dave is a completely different animal from the rest of the Zoo. He was colicky, he didn't want to nurse past eight months and actually thrived on formula, he is blonde haired and blue eyed, he screams..a lot..with joy, with anger, with surprise..it really doesn't matter the circumstance, David just likes to scream. Once he began sleeping through the night, he did it with a flourish...we're talking 11 hours straight, people. Once he learned to sit, he was content to sit amidst a pile of toys, or in front of his beloved "Signing Time" for hours without complaint. I'm telling you, he went from being the most work of all (during those colicky times) to being the easiest one of all...

Our mistake was in teaching the boy to walk. He resisted, preferring to be carried every where he went of course, but we persisted, encouraging the tiniest efforts and even rewarding him for the smallest progress...we were fools. Because now you see, the animal is mobile and can climb stuff, and knows where all the good stuff is hidden. Did I tell you before about how he decorated the kitchen not once, but three separate times with food coloring? Did I mention the Sharpie marker on the walls and doors of our hallway? Have I told you about the cookies that I needed to deliver to a customer, that had tiny little bites missing from them? Have I mentioned waking up in the middle of the night to find him in the living room, having turned on all of the lights, sitting in a pile of bills and other mail with a ball point pen and drawing on said mail?

Well, I know I've mentioned that I feel the need for a gate to keep him in his room at night while all the normally watchful eyes are sleeping...but alas, I'm still losing that argument. Which leads me to David's latest late night adventure...

I awoke at 5:30 as usual to start my morning run, only to open my bedroom door and find little Dave standing there holding something in his hands and eating it with great enthusiasm. As soon as he saw me, he dropped the something and took off running for his bed. I bent over to pick up the something and discovered that he had eaten two one ounce squares of chocolate almond bark that I use for baking and was working on a third! Yes, my son is a chocaholic, and a candy addict as well. One day in the future when he is sitting in his weekly therapy session, I'm sure he'll blame me for his addictions. "It was all my mother's fault! She ran a cake and cookie business right out of our house!! I was surrounded by sugar MY WHOLE LIFE!!!"

You know, back when I was praying for God to give me just one more baby, I had considered the ramifications of having a newborn at 40 years old...what I neglected to consider were the ramifications of having a 2 year old at 42!!! Next week I will celebrate my 42nd birthday, but oh.my.word. it feels more like 82! Can I get an "AMEN" from the choir please??? Thank you, thank you very much, and please pass the Geritol...

Here is a rare picture of the little guy sleeping (yes, he is actually asleep) at his brothers' football game...I'm guessing his late night adventures wore him out! 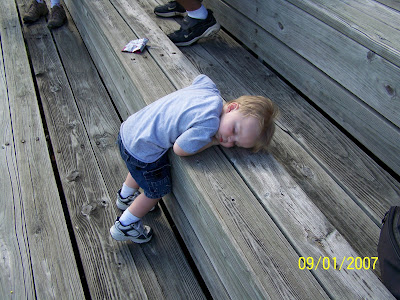 Wow I thought my little two year old was a hand full.... but I'd have to say your little David puts her to shame:)

Praying for much needed energy on your part!!!:)

Well, I just turned 43 so I understand about the geritol.

Your little man definitely sounds like a hand full. Our youngest who just turned 4 likes to try and leave the house in the middle of the night. Needless to say, very high locks have been put on all the doors. It is like living in Fort Knox.

I think I vote for a lock on his door. A chain lock might work, he could still open the door and look out, but couldn't escape and get into all kinds of trouble.

Good Luck, and hang in there. This to shall pass.

Think of this - when my son is in high school, my husband will be almost eligible to retire, and the daughter we're adopting will be in preschool! It makes my head hurt some days!

Oh - and my mom had to put locks way up on the outside doors when my brother and I were little. He just pulled the chair over and stacked stuff up to reach the lock and let us outside. Naked. While my parents were still sleeping...

See - it could be worse!